As I settle into the autumn of my writing career, my goal is to return to my roots–those being my first four novels–and focus on writing fiction. But before I putting myself out to pasture with my imaginary friends, there is a story that I’ve wanted to tell and it’s been on my mind since I penned SEAL Team One over a quarter of a century ago. It’s the story of Tommy Norris and Mike Thornton. Well, here it is. Technically, they are the authors, but I’m proud to say I’ve been with them every step of the way, and helped them in the telling of their story.

Those of us with a long association with the Navy Underwater Demolition and SEAL Teams all know the story, or something of this amazing story. It’s a part of our lore. What Tommy did going back into North Vietnamese controlled territory night after night in searched of downed American airmen was the epitome of courage, professionalism, and self sacrifice. What Mike did to rescue Tommy and their Vietnamese-SEAL teammates from the clutches of the North Vietnamese was beyond heroic. We in the teams know Tommy and Mike as two of our most celebrated warriors. But few others do.

Mike and Tommy have been approached about their intersecting combat exploits by other authors and by the movie industry, but for one reason or another, the timing or the approach was not right. A short while back, the three of us were in Coronado for work on the documentary, Navy SEALs, Their Untold Story. I said, “Guys, none of us are getting any younger. If this is going to get done, we should get at it.” To my surprise, they agreed. So we found a publisher, signed a deal, and went to work. This was not my first rodeo; By Honor Bound will be my twenty-first book. I say my book but again, the authors are Mike Thornton and Tommy Norris. From the beginning, I knew this was going to be a very special book because Tommy and Mike are two special SEALs. And their lives and contributions after their time in the Teams have been equally special. Mike served a full career in the Navy, completing tours as a Diving and Salvage Officer. Tommy had a storied career as a Special Agent with the FBI.

Tommy Norris and I were classmates in BUD/S Class 45 (East Coast). Mike Thornton and I were teammates at SEAL Team One. Like all BUD/S classmates and SEAL teammates of a given era, I saw Tommy and Mike on occasion. And of course, we talk war stories and how it was back in the day. Tommy lived with my wife and I for a short while during his extensive convalescence after being wounded. So I knew these two men well, or at least I thought I did. As we began this project and drilled into the mechanics of their operational lives and the particulars of the operations for which they became Medal of Honor recipients, I was simply amazed. My own experience as a SEAL in Vietnam only served as a prism to fully understand and appreciate what these two men did. The citations do not do justice to the dangers they faced and the manner in which they performed their duty. Their conduct was “over and above” and then some.

In the Teams, we’re brothers by different mothers, and the reflected glory of men like Tom Norris and Mike Thornton–and Bob Kerrey, Mike Monsoor, and Michael Murphy–makes us proud by association. Most recently, those honored warriors are joined by Senior Chief Ed Byers. Yet the bond shared by Tommy and Mike is unique and rare. In By Honor Bound, they tell their stories in their own words and their own way. It was an honor for this writer to serve as their narrator and to help bring their personal and operational lives into this book. Bob Kerrey wrote a wonderful forward for the book, and Drew Dix, a close friend of Tommy and Mike’s, contributed a preface. Drew received the Medal for his defense of the city of Chu Phu during Tet of 1968. And great many SEALs who served with Mike and Tommy provided some interesting and humorous anecdotes–my thanks to all. The story of Tommy Norris and Mike Thornton is a must read for every Team guy–and every American.

By Honor Bound will be available 17 May, 2016 in Hardcover, e-Book, and Audio Book

« The Grey Zone Defined
Only the Best and Most Qualified » 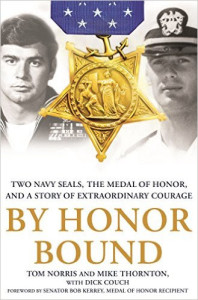