Navy SEALs, and indeed all of our special operations forces, will be asked to do a great many things in the years ahead. As they take up their future duties, they will build on the legacy of the previous generations of special operators. My generation of Navy SEALs went into the jungles of Vietnam ever mindful of the legacy of the World War II and Korean War Navy frogmen. The SEALs who have repeatedly deployed in harm’s way in Iraq and Afghanistan were handed the torch by those of us from Vietnam–SEALs like Mike Thornton and Tommy Norris of By Honor Bound. And the “new guys” have added a noble chapter in the battle history of the Navy SEAL Teams and Naval Special Warfare.

But what will our SEALs be doing in the future? It would seem that the ongoing, now-global battle against terrorism has no end in sight. Yet one mission that is still a key responsibility for the Navy SEALs is the counter-proliferation of weapons of mass destruction–chemicals, biologics, and of course, nuclear weapons and nuclear materials. The first two are dangerous but the third, nuclear weapons and materials in the hands of zealots or religions extremists–non-state actors or otherwise, is the ultimate nightmare. John Moody, Navy SEAL; The Kola Peninsula Conspiracy is fiction and takes place in a cold-war setting. And it is a showcase for the SEALs’ seldom-used, yet very important, cold-weather skill set. It might well be a blueprint for a current scenario that none of us wish to contemplate.

A word about my friend John Moody. I like to think of Moody as a “best-practices” Navy SEAL. I’ve been associated with SEALs/military special operations for close to fifty years. Along the way, I’ve met some amazing individuals and a few of those I’ve been privileged to call my teammates. John Moody represents some of the more professional and capable aspects of those special warriors. And some of the more personable and rowdier sides of them as well. There will be more John Moody adventures to come. I hope you enjoy this one. 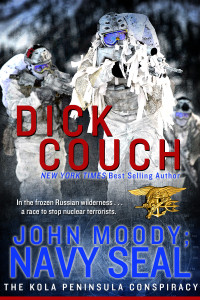